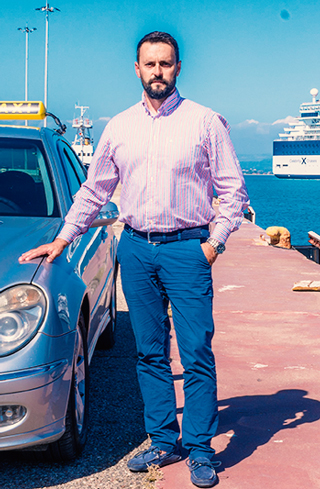 His name is Nicolas Theodorakopoulos, he is 42 years old and was born and raised in a small village near Olympia called Epitalio. He is a father of two children and he has been married since 2008.

He speaks English and after 10 years of experience as an employee and driver to a private company on the island of Mykonos, since 2004 he owns and operates a Taxi in Pyrgos. His car is a new Mercedes Benz E220 AMG, licensed by the Greek Ministry of Transport and checked by the Greek Transportation Checking Authority every year. It’s a comfortably air conditioned, luxury vehicle with a high safety standard, fully insured and free Wi-Fi!

At the beginning of his carear as a taxi driver, he served regular, everyday commuting rides in the surrounding area of the Prefecture of Elias. As time went by, through hard work and continuous effort, he started working in the tourism industry by offering his services to visitors arriving at the port of Katakolo. Over the next few years he managed to build bridges of trust, reliability and discretion with his clients.

As dozens of reviews on the Internet testify, Nikos is the best to express the ideas and values of Greek culture and hospitality.

He is a taxi driver who will become your friend, inspire you confidence and take care of you by offering you safety.

We specialize in creating personal private tours. With us, you will experience a private tour based on your needs and desires.

We operate on your schedule. We don’t waste your time travelling and seeing sights in which you are not interested. Our private tour sightseeing includes you and your team. We can show you all of the Olympia’s famous attractions. We don’t just drop you off and allow you to wander around on your own in other sights or areas. We don’t jam you in the taxi with other strangers. On our private tour you will have our full attention. We will take you in, explaining and describing as we go. We make sure you don’t miss anything important, and that you don’t get lost!

If you are more than four persons*, (In collaboration with other colleagues who work having the same philosophy with us and have followed us several times when we need more taxis to accommodate bigger groups) we can arrange more than one vehicle in order to serve your needs in the best way!

*According to the greek laws for a taxi license , each taxi is allowed to carry up to 4 passengers. This means that taxi drivers are not authorized to use mini vans or any bigger vehicle than a sedan.

In the western Peloponnese, in an idyllic and peaceful valley, between the hill of Kronio and the confluence of the rivers Alpheus and Kladeos, the Ancient land of Olympia, the most glorious sanctum of the ancient world, stands as an international symbol of humanity.

During classical times Olympia was the city of Ilia best known as the area where the Olympic Games took place, the greatest athletic event of the then-Greek world. Today Ancient Olympia is a village and a municipality of Ilia, built in the valley of river Alpheus. Nearby lies the archaeological site, one of the most popular ones in Greece, which attracts every year tourists from all over the world.

The first excavations in the area began in 1829 and are still on-going, with important information constantly coming to light. The archaeological site’s most important buildings include the Gymnasium, the Palaistra, the Stadium, the temple of Zeus, the Vouleftirion, the Baths, Phidias’ workshop, the Leonidaion (guesthouse for the noblemen), the Sanctuary of Hestia and many more. There are indications that Olympia was inhabited in the 3d millenium B.C.

It reached its great prime between the 8th and the 5th century B.C. A significant contributing factor to this was the official establishment of the Olympic Games in 776, something which brought thousands of visitors to the city every four years. This fact is attested by the vast number of votive offerings from almost all areas of Greece.

It was here that the Olympic Games were born in honour of Zeus and were accompanied by the sacred truce that signaled a pause in hostilities between cities. The message of noble emulation and peace is preserved even today by this holy place and delivered through the Olympic Flame to every corner of the earth. The flame symbolizes the glorious triumph of the spirit and the creative power of man that continues to forge civilizations.

Ancient Olympia today remains a place of paramount importance and a center of global concern as the birthplace of the Olympic Games and the Olympic Ideal.

Visit Ancient Olympia and allow your senses to explore, feel the awe of the Olympic spirit. Be profoundly affected by mythology and enjoy a unique and unparalleled experience. Become an Olympian.